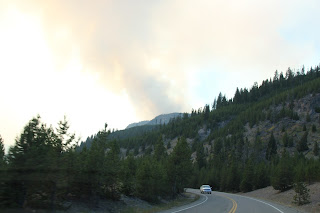 This is by far the smokiest year we've seen while residing in Yellowstone. The smoke is dangerous, not so much the fires. 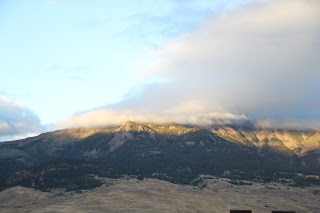 There are a minimum of 8 fires burning in the park that we know of but 5 of those are in the same geographic location so managed as one large fire area to allow fire resources to be moved to the needed areas. 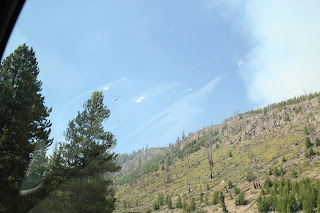 The fires are allowed to burn to promote new growth of trees and underbrush that require the intense heat to release the seeds.

The policy of the National Park Service (NPS) is to let the fires burn themselves out unless structures and people will be injured. 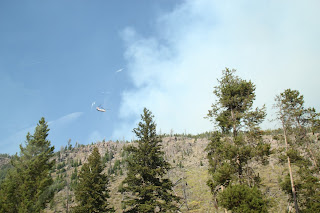 Bob and I drove from Gardiner to West Yellowstone (the west entrance into the park) to visit the little town there and see a play group that was recommended. (Next post :) 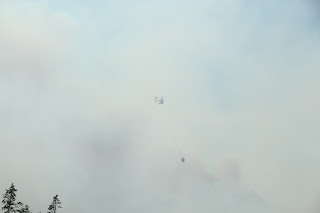 Along the way we took pictures of the fires in that area and of a helicopter that was dropping water above a ledge toward the town to prevent the spread in that direction. 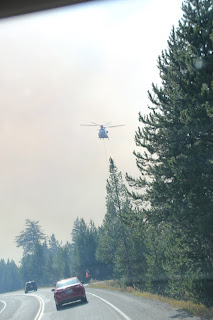 We also saw a few 'staging' areas of firefighters to fight on the ground if needed.

On this day the wind was not bad so the water drop appeared to be helping. 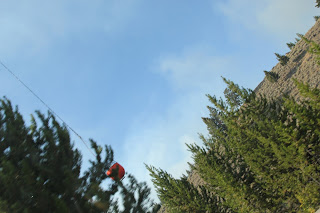 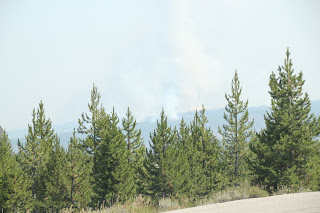 This is the day we drove back into the park. You can see the different locations along a ridge that are burning. 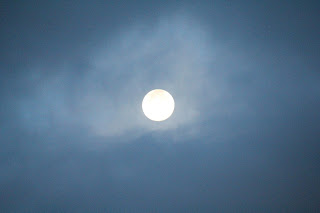 And this was the full moon that night, covered in a smoke filled haze!  We've had about 3 clear days since we arrived August 1. With the 100 year Anniversary Celebration on the 25th coming up, we're hoping the wind shifts away from us for at least one 24 hour period!


Posted by Barbara Washburn at 8:54 PM

Thank you so very much for taking the time to look and comment! Blessings!

Barbara Washburn
My sweetheart of 50 years and I love to travel and hike, but when I get the chance, I also enjoy making cards with the homemade paper I've made.